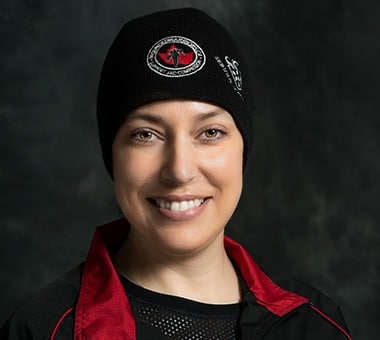 Jacqueline was born and raised in North Vancouver, British Columbia. She joined the Cadet Instructor Cadre in 1998 and became passionate about field training and survival instruction. She attended Capilano University and achieved a Diploma in Outdoor Recreation Management in 2000. She was fortunate to spend her last semester of school in Tasmania, Australia as a sea kayak and rock climbing guide.

In 2002 Jacqueline moved to Victoria and began a career with SNC-Lavalin Defence Programs Inc. She continued to work as a reservist on various contracts teaching both cadets and officers. During her time at SNC-Lavalin she worked with the Marine Coastal Defence Vessels (MCDVs) and auxiliary vessels supplying parts and testing fresh water.

In 2009 Jacqueline was blessed with her daughter, Hailey and in 2010 when going back to work from maternity leave she decided to work towards a full time reserve contract at the Regional Cadet Support Unit. She continues to fill a full time roll as the J5 Air Plans Officer.

Jacqueline became involved with Wounded Warriors by signing up for the Battlefield Bike Ride 2016 in Italy. Unfortunately, in November 2015 she was diagnosed with stage 2 breast cancer and underwent surgery, chemotherapy, radiation and hormone treatments and was not well enough to attend the ride. The efforts of Wounded Warriors became that much more meaningful as she fought through treatment and her own trauma, which fueled her desire to give back and help others. This determination came to light when she became one of the 7 runners for the Wounded Warrior Run BC in February 2017, which was as month before completing active cancer treatments. She was also able to find redemption by completing the Battlefield Bike Ride 2017 through the UK, Belgium and France and she hopes to continue raising funds and awareness this incredible cause.