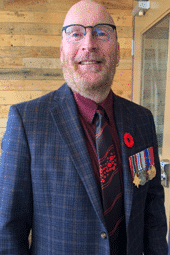 Stan is a retired Army Telecommunications Lineman with 21 plus years of service in the Canadian Armed Forces. During his time in the forces Stan was extremely fortunate to be able to deploy overseas several times as well as work in every province and territory with only one exception, the Yukon.

After his retirement, Stan completed the first Wounded Warriors Battlefield Bike ride. Stan is also a wounded veteran who deals with PTSD on a daily basis with the help of his family and groups like WWC. He has been using cycling to help with his recovery and realizes the beneficial impact it has had in his recovery.

Stan lives in Airdrie, Alberta with his loving wife and their wonderful animals which have also had a huge impact in his recovery. Both Stan and his wife, Brenda, try to live by the WWC motto: Honour the Fallen, Help the Living.