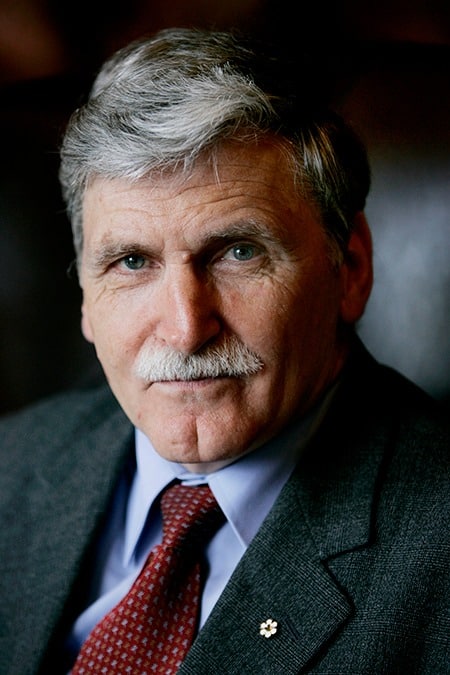 The Honourable Roméo Dallaire had a distinguished career in the Canadian military, achieving the rank of Lieutenant-General and Assistant Deputy Minister of Human Resources. In 1994, General Dallaire commanded the United Nations Assistance Mission for Rwanda (UNAMIR). His experiences there became the subject of the book Shake Hands with the Devil: The Failure of Humanity in Rwanda, which was awarded the Governor General’s Literary Award for Non-Fiction in 2004 and was the basis of a full-length feature film released in 2007. Medically released in 2000, due to PTSD, Senator Dallaire has worked as an author, lecturer and humanitarian, conducting research on conflict resolution and child soldiers at the Kennedy School at Harvard. His most recent book, They Fight Like Soldiers; They Die Like Children – the Global Quest to Eradicate the Use of Child Soldiers, introduces the Child Soldier phenomenon and solutions to eradicate it.

General Dallaire helped reform the assistance provided to the new generation of veterans particularly affected by post-traumatic stress disorder. General Dallaire was appointed to the Senate effective March 24, 2005, and is the Vice-Chair of the Senate Standing Committee on National Security and Defence as well as President of the Senate Subcommittee on Veterans Affairs. He was appointed with Bishop Desmond Tutu to the United Nations Secretary General’s Advisory Committee on Genocide Prevention in the spring of 2006 and is a Fellow at the Montreal Institute of Genocide Studies, Concordia University. He is an officer in the Order of Canada since 2002, a recipient of the Pearson Peace Medal in 2005, a Grand Officer of the Order of Québec in 2006. He holds honorary doctorates and fellowships from almost three dozen universities in Canada and the United States.